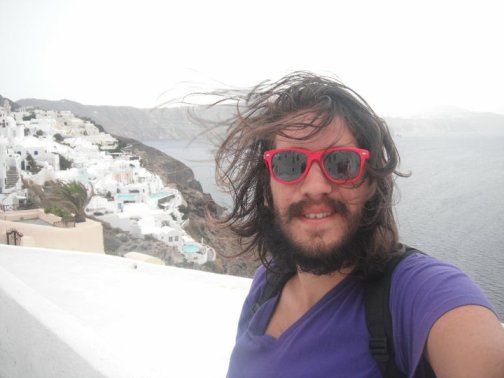 “I had just made my way through one of the public markets in Athens and I felt someone in my back pocket.  I guess I would describe it more as an emptiness or a sudden lightness.  I wheeled around and grabbed hold of this little Greek guy.  Give it back to me, give me my wallet!! I yelled, shaking him.

Suddenly, a second man came running up to me and pointed out a third man about 50 feet away with slicked back hair.  It’s him, he said, That man there took your wallet.  I only had a moment to think and my wallet was getting away.  I let go of the first man and darted off after the man with the slicked back hair.

When I finally caught him, the man with the slicked back hair was very confused and had absolutely no idea what I was talking about.  When I turned back around, the first two men had disappeared.

They made off with my wallet and all my credit cards but I’m 6’10” tall with long hair and a massive beard so, when I grabbed him, I’m pretty sure I gave that first pickpocket a pretty good scare.”

This entry was posted on August 29, 2012 by Allen. It was filed under Uncategorized .