Thanks, from the Cast of Felony!! 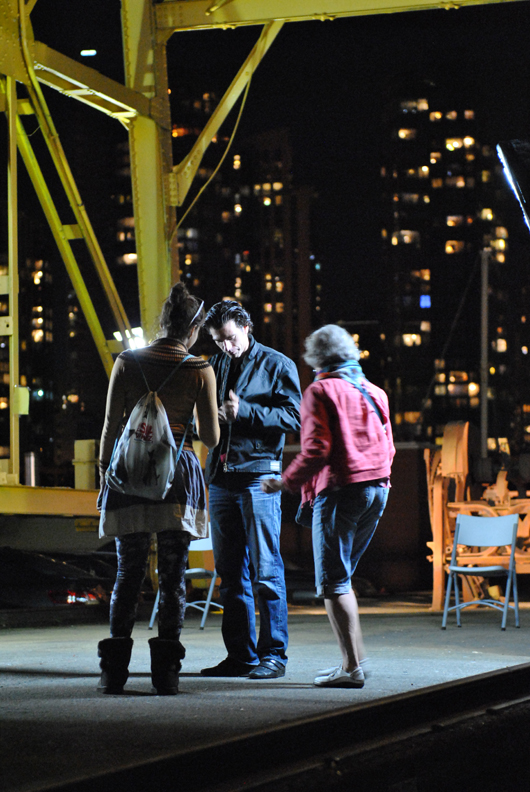 Listen as Allen Morrison, one of the minds behind Felony, talks about the creation of the hit Fringe show on CiTR 101.9 FM’s podcast This Fringey Life.  The actual interview takes place between 1:37:45 and 1:44:22.

Congratulations to the cast and crew of Felony for winning the inaugural Site-Specific Award for “best use of a non-traditional or site-specific theatre venue” at the 2012 Vancouver Fringe Festival Awards last night!!!  15 shows, 15 sellouts.

Immediately after our acceptance speeches, we stole the awards table and podium.

Here’s the Plank Magazine review.  We have censored it, slightly, for your protection.

“I had just made my way through one of the public markets in Athens and I felt someone in my back pocket.  I guess I would describe it more as an emptiness or a sudden lightness.  I wheeled around and grabbed hold of this little Greek guy.  Give it back to me, give me my wallet!! I yelled, shaking him.

Suddenly, a second man came running up to me and pointed out a third man about 50 feet away with slicked back hair.  It’s him, he said, That man there took your wallet.  I only had a moment to think and my wallet was getting away.  I let go of the first man and darted off after the man with the slicked back hair.

When I finally caught him, the man with the slicked back hair was very confused and had absolutely no idea what I was talking about.  When I turned back around, the first two men had disappeared.

They made off with my wallet and all my credit cards but I’m 6’10” tall with long hair and a massive beard so, when I grabbed him, I’m pretty sure I gave that first pickpocket a pretty good scare.”

Top 10 Cities in Europe for Pickpocketing

In 2010, the travel review site, TripAdvisor, conducted a study of the top 10 cities in Europe for pickpocket crimes.  It compiled it’s statistics from the various reviews and comments of it’s members.